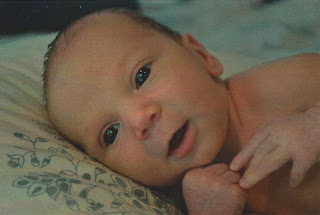 Today, I was part of something that I never dreamed I would be a part of, in fact, my dreams would most likely never hold something quite like this.  Dreams are usually things we wish for and I would have never wished for this, for myself, and especially not for my friends and their family.  I officiated a funeral that I wish I had never had to officiate.  I'm not sure anyone would have been happy to officiate the funeral of a 6 month old whose first symptoms of sickness started on Thanksgiving Day, who received a diagnosis a few weeks later, and passed away exactly three weeks from the date of diagnosis.

For someone like me who speaks in public regularly, is it possible that something could be a privilege and a nightmare at once?  Anyone who knows me knows that what you see is what you get, and I know that those who consider me a friend appreciate this as one of my finer qualities.  Those who don't consider me a friend are most likely offended by it, and that's fine, they can continue to hang around with people who placate them and tell them all the things that they want to hear.

For some reason, even knowing me as he does, my friend, Henry, asked me to officiate the funeral for his precious baby boy today.  Friends are there for each other, through thick and thin, in good times and in bad (don't worry, I'm not trying to summon my innermost Stevie Wonder with a stirring rendition of "That's What Friends Are For"), they run towards you when everyone else is running in the opposite direction.  That's the kind of friend that Henry has been to me, so how could I refuse a friend?

As I watched the events of the day unfold before my eyes, I saw hundreds of people file into the chapel of a funeral home to show their love and support for a couple whose experience was atrocious.  In spite of my own desire to numbly walk through the day, to avoid all emotions and simply get through, I knew that I could not let myself do it.  I had to be engaged, I had to be a part of it, I had to be present within every moment possible.  I needed to be there for my friend.  And that's just what I did.

What I saw was astounding.  I saw hundreds of people come together under crummy circumstances and experience love.  I saw a little boy with an infectious smile, taken away much too early, be the driving force that brought people together to hear the story of a family, a family whose world had been shattered, a family that despite their shattering circumstances, was held together by love.  I heard the story about people who had shared and experienced that love, in a place and during a time where it never would be suspected that it could exist.

I heard stories of neighbors reaching out, of doctors giving up 1, 2, and 3 of their free days to be with a family in need, of fellow workers and friends who offered themselves for anything that was needed, of nurses exhibiting the kind of love and sensitivity that was necessary for such a delicate moment.  I heard stories of pain, watched countless tears be shed, and managed to shed more than my own fair share as well.

The journey has just begun for my friend and his family.  It will be long and winding, it will be dark and stormy, but I know that they are not alone.  They are surrounded by good people, and despite popular belief, they are being held by a good God.

As I walked through this day, hesitant to feel the emotions that it held, I began to see glimpses of God everywhere I looked.  Instead of destroying faith, somehow this situation had restored faith in little pockets in the places where I looked.  I certainly wish that restored faith could have come under better circumstances, but somehow tragedy brought us to a place where faith seemed to be the only thing that was left.

Today is a day that I will never forget.  That my friend allowed me to share my thoughts in the midst of his grief was a privilege that I would rather not have been afforded simply because I wish the grief had never happened.  But it did, and we can't change that now.  As I said to Henry and his family, the legacy of Connor is being passed on to others, already they have begun to raise money to support research in order that a horrible disease might be eradicated.  You can find out more about that if you follow this link: http://www.jackandabby.org/

What just happened?  I experienced something that was beautifully tragic or tragically beautiful, not sure which one.  I experienced a life cut short after six months make more of an impact than some lives lived over the course of many years.  Today and every day moving forward, I will hug my children a little longer, I will linger on that kiss with my wife, I will savor the mess if it means an extra minute with my baby girl, I will soak in the moments that are before me, not rushing past them because I never know when they might be gone.  I guess what happened is nothing short of a miracle.

(Here's a picture of the balloons that were released in honor and memory of Connor.  I like the butterfly one on the far left) 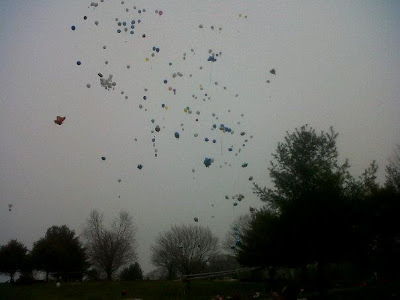