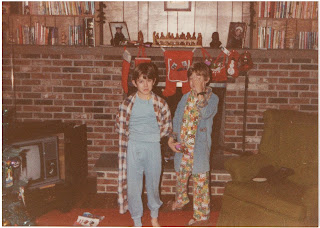 One year, when my brother and I were probably about 11 and 7, respectively, we had been pretty terrible in the months leading up to Christmas. We were constantly fighting and getting at each other and my parents had constantly warned us that if we didn't stop, "Santa" would be bringing us nothing but broken, old toys for Christmas. As was usually the case, we assumed that our parents were kidding and that they would never even dream of withholding presents from us at Christmas. After all, everyone should get presents, right?

Well, Christmas morning approached and there was no improvement in our behavior. So, when we woke up on Christmas morning and went out to the Christmas tree, all that we found underneath was a pile of broken and old toys with a note that said something to the effect of, "You've been naughty, and here's what you get!"

Needless to say, we were devastated. Me being the younger of the two of us, I think that I was probably more so. I remember whining and crying and trying to convince my parents that this was unfair and unjust (trying to capitalize on the biblical notion of justice). Finally, after my parents had felt that their point had been sufficiently made, they went to a closet and pulled out all of the "real" presents. We were overjoyed with this gracious act, telling our parents that we knew all along that they would never do this to us, while secretly taking in a deep sigh of relief.

My parents just sent me a bunch of pictures from that Christmas and the one here shows my brother and me in our state of dismay and disbelief, me wiping the tears from my eyes. The funny thing is, I had just recounted the story to some people at our work Christmas party the week before. It has always stayed with me.

Now, parenting experts may call the exercise cruel and unjust, some people may think that it was harsh, and to be frank, I'm still not exactly sure how I feel about it. My leaning is towards the fact that my parents showed my brother and I an incredible amount of grace. What we deserved, based on our actions and behavior, was the broken toys. What they gave us were the presents that showed that despite our imperfections, they loved us.

I didn't have to go through years of counseling to get over this and yet I still remember the Christmas vividly. In a lot of ways, I can't help but connect what my parents did to what God did for us when he send Jesus to the world. The history of God's people is full of stubborn and obstinate people who thought that regardless of their behavior, a loving God would never turn his back on them and would never mete out justice on them. They were right, but someone still had to pay the price. That someone was Jesus. He is the gift of grace that God gave to us. When we deserved nothing but "broken and old toys" God gave us the best thing that he had to offer: his only son.

As I raise my boys, I hope and pray that I can instill in them the fact that Christmas isn't about getting what we deserve, it's about receiving the gift of grace from God. Christmas isn't about all the commercialism that is preached at us from Black Friday on, it's the realization that no gift could ever compare to what we receive in and through Christ.

May we come to the realization that the best thing that we can get and give is the news of this gift of grace. May our hearts always be reminded of what we deserve and be thankful of what we receive instead through grace.

Posted by Jon Gibson at 7:30 AM No comments: 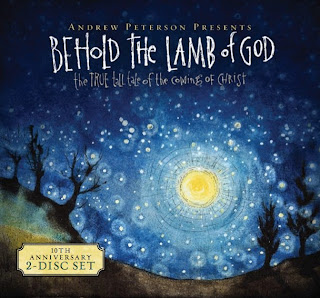 I listen to a lot of music. That's probably an understatement. Since it's a good part of what I do in my job, you might say that I get paid for listening to music. Of course, it's so much more than that, but I do have to preview music to see whether or not I can appropriately introduce it to our church congregation.

As a kid, my brother and I were forbidden to listen to music that fell outside of the realm of "Christian." Consequently, my brother and I are now complete music "freaks." He has a vinyl record collection that continues to grow daily and I have a CD collection that is ever inching towards the three millenium mark. Both of us have grown to be "music snobs" in some ways and I think that we are comfortable enough to be willing to admit that.

The best musicians that I have encountered are ones who are fairly diverse in their taste. I always enjoy asking people what they listen to and hearing the response, "Anything." I take that as a challenge! Do they like metal? Rap? Hip hop? Classical? I usually find out that "anything" means, "anything but that." I truly listen to a wide array of music: classical, soundtracks, Broadway, folk, rock, folk-rock, classic rock, heavy metal, hip hop, and the list continues.

When I was growing up, music was a big part of who I was. My mom introduced me to the Carpenters who got me through a lot of difficult times in my freshman year of college. I loved listening to the Andrews Sisters sing "Mr. Sandman." Although my mom's collection wasn't vast, it introduced me to some classic music which I still embrace.

As my love for music grew, I was particularly moved every Christmas at the sheer volume of music that was available. Everyone who was anyone had released a Christmas album, which is not to say that they were all good, but they were there nonetheless. Because of the sheer volume of music that was available, it was easy to get sidetracked into some pretty bad releases. Looking at my Christmas music collection, people who know me would not be surprised to find Bob Dylan's Christmas album or the Carpenters Christmas album. But there are some gems in there like Kenny Loggins' "December" and the soundtrack for "The Muppet Christmas Carol."

I pretty much start listening to Christmas music in July or August. It again goes back to the nature of my job in that if I don't get a jump on Christmas during the summer, I'm pretty much going to be "winging it" during the months of Fall. In fact, one of the songs that we are working on for Christmas this year is a song that I discovered a few weeks before Christmas last year. Music is always on my mind and while I love the classics, I am always anxious and interested in hearing something that's new and different.

When my wife and I lived in Asheville, North Carolina, we had friends from Connecticut who had migrated to Charlotte. My wife was finishing her Master's degree in counseling at Gordon-Conwell Seminary in Charlotte, so we would spend a good deal of time in Charlotte for my wife to take classes and for me to spend time with our friends, searching the used CD stores around Charlotte for deals.

As my friend, John, and I were driving one night to the store, he had a CD in his car that we were listening to. Now John is not a singer (sorry, John) but this CD had him wanting to belt out the music. As I waded past my friend's slightly off-key singing, I listened closely to the music and was struck by the sheer musicianship of the artist. John is pretty critical, like me, and I knew that if this was something that he embraced, it might require a second look. So, I asked him who it was and he told me that it was an album called "Behold the Lamb of God" by Andrew Peterson. It was a song cycle about the birth of Christ.

Like me, Peterson is a pastor's kid. So, I feel a connection to him immediately. I went home and ordered the CD. When it arrived, I listened to it from start to finish (unheard of in these days of iPods and MP3 players). After I finished it, I listened to it again, and again, and again. I was captivated by the power of story and how Peterson had weaved the story of Jesus together, incorporating the Old and New Testaments. I'm fairly critical of music (although some would question that as I am a Bob Dylan fan....but whatever!) and beginning to end, this album was superb. The lyrics and melodies were well-crafted, the songs all connected with each other and with me. The album immediately became a staple in my Christmas music collection.

I eventually found out that every year, Peterson tours the country and as Christmas approaches, he plays through the entire song cycle of "Behold the Lamb of God." He also plays at the historic Ryman Auditorium in Nashville with special guests. I purchased a DVD of one of his Ryman concerts and watched in awe with tears coming to my eyes, moved by the sheer power of story, especially the life-altering and world-changing story of Jesus.

Tomorrow night I get the opportunity to experience "Behold the Lamb of God" with some friends. I hope that I have not talked it up too much, but if it has near the impact on them that it has had on me, then I expect nothing less than transformation for the Christmas season for all of them. Aside from the lyrics, music, and incredible talent of all who play and sing, the most important part of this album is that it helps me to remember why I am celebrating Christmas. It's not to get lots of presents, to make sure that my kids get everything they want, or to see some fat guy in a red suit. I celebrate because God saw fit to bring Shalom into my world by offering his son, Jesus, as the greatest gift that anyone could receive. A baby was born, and that baby changed the world. "Behold the Lamb of God" is all about that baby, but more importantly, about how that baby turned everything upside down when he became a man.

As you go into this Christmas season, if you are a lover of music, I would seriously encourage you to check out "Behold the Lamb of God." I would be very surprised if it didn't have an impact on you. After all, it's not necessarily about the music, it's about Jesus!

Here's the link to the album: