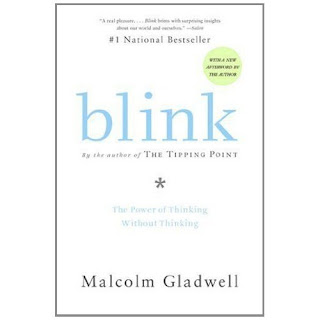 I just finished a book called “Blink” by Malcolm Gladwell. It was the second book that I have read by Gladwell in the past few months. The main gist of this book was about the process of decision making and whether it is better to make snap decisions or processed and well thought out decisions. Gladwell brings in real life case studies to prove the points that he is making. The book is a few years old, so there were a number of cases that were somewhat dated such as the O.J. Simpson trial and the Amadou Diallo shooting, but they still made sense for anyone who recalls those stories hitting the press when they were current.

There have been many times that I have faced a decision in my life when I researched a lot in an attempt to gain as much information as was available, making sure that I had done my homework before making a decision. Gladwell opines that having too much information can actually be harmful in the decision-making process. Sometimes, snap decisions are the best, especially in staying power for the long term with little regrets felt later.

Towards the end of the book, Gladwell writes, “The key to good decision making is not knowledge. It is understanding. We are swimming in the former. We are desperately lacking in the latter.” It really made me stop and think. We have so much information at our fingertips, information that we generally assume to be true and reliable. With a few clicks of a button, we can compare and contrast the prices of cars in different states, find the best price on electronics, file our taxes, pay our bills, and do countless other things that used to take much longer. In some ways, the simplification of these tasks has made us lazy. We don’t check things that we should and we end up taking things for granted.

In many ways, these are the remnants of modernist thinking on our culture and society. The modernist looks for initials after names and degrees hanging on walls, while the post-modernist looks for scars and battle marks to prove that there has been some experience behind the knowledge that one has gained.

Within the church, I have seen this all too often as well. If you jump through the right hoops and spout a lot of information or knowledge, you may be respected. Some pastors will even take advantage of the knowledge that they have gained. While I don’t want to overgeneralize the situation, there has been a tendency with some pastors to go right from Christian school to Christian/Bible college to seminary to a church. The exposure to our culture and the world in which they will need to minister is minimal and they are thrust into a situation where they are called to shepherd or lead those who are living in that culture every day. Can that really be effective? Sometimes it can. Oftentimes I think that it can be destructive.

The best example I can think of for the vast difference between knowledge and understanding is in relationships, particularly the marriage relationship. I can know an awful lot about my wife but that does not mean that I understand her. Gaining knowledge causes people to be seen as problems to be solved rather than relationships to be entered into. Gaining understanding of a person generally leads to a relational connection that is far more organic than simple knowledge.